An experiment in attention

In this blog, I want to try something a little different. I have been struggling with an issue that has been impacting my happiness. It’s very much a current issue, not something I’ve solved for myself. But I had an idea.

Yesterday as I sat in the silence of my Quaker meeting, I had the idea of “turning towards the light” – not to ignore negative feelings per se but equally not to ruminate on them.

“The first step of peace is to stand still in the light.”

Or, if I’m able to adapt an excerpt from Advice and Queries to make it more comfortable for agnostics and atheists,

“Take heed to the promptings of love and truth in your hearts. Trust them as the leadings of good, whose light shows us our darkness and brings us to new life.”

So I want to try applying this in my day to day life this week and share how it goes and anything I might learn.

I have been allowing negative things to take over disproportionate space in my brain. For instance, I was bothered by a situation affecting my older son. He was hurting and I was feeling angry as information and actions unfolded. I also have had a particularly busy and stressful time at work, sometimes resulting in feeling let down by others.

I have found myself ruminating on negative feelings, such as judgement of others, or imaginary conversations and diatribes that I’d never have the nerve to have in reality (which is probably a good thing).

How it tends to manifest itself is more as snippy, passive aggressive micro-aggressions – a comment here, an unnecessary aside there.

All of this has left me feeling less in love with life than usual, and my resilience has started to shake a little.

So my idea really is about accepting these negative feelings, and then turning towards the light. I may have 20 great interactions at work and one where someone disagrees rather heatedly about the direction of a project I’m working on. Can you guess which one I think of on my commute home and hold rehearsal conversations that will never happen?

I live a beautifully full life – a young and loving family, a wide array of friends, a healthy body that loves movement, a passion for happiness, learning, and writing, more quality books in the world than I’ll ever have time to read, plenty of hobbies and interests…so why would I focus so much energy obsessing over niggling irritations?

Today was a good example. I had one or two difficult meetings at work, and I was able to keep my cool and recall the good stuff, even (to an extent) in the moment as colleagues started to get slightly upset. Afterward, as I started to rehash it over and over on the train, I remembered the phrase, “turn to the light” and instead of getting annoyed at others’ reactions I started focusing on the positive interactions from the day. Instead of feeling like my ideas had been unfairly dismissed out of hand, I looked back at a productive day where I also shared some smiles and laughs with colleagues. I’ll still need to pick up the points that didn’t go so well, but revisiting the topic now as I write this, I feel calmer and more positive about it all.

I feel more compassion for my colleagues who seemed to get upset over minor things in the meeting, and have a greater sense of perspective myself. I see the slightly more emotive interactions in that single meeting in the wider context of my whole day, and all the work we’re doing, and the wider organisation, and suddenly the issue we had been discussing feels totally manageable. I still have my view on it, but I can also negotiate better without feeling upset that the “right” opinion (i.e. mine) isn’t being taken forward right now. And this means I can feel compassion for colleagues who appeared to be upset when I offered a different viewpoint, and how they might have felt attacked in that moment, because someone was disagreeing with them.

So today I again felt like maybe I had unwittingly alienated colleagues. I didn’t want to brush this under the rug. So I examined it without trying to defend myself.

What I realised is that my points are often valid, and the way I present them is fine, but it’s possibly suggesting that I am judging others. Or that I think I know better and am criticising others when I make suggestions or add my own thoughts.

It’s too late I do anything about this when this idea hits me, so I sleep on it. But coming to this idea makes me feel better, like I have an idea and I am also or beating myself up for what’s already gone.

Today was odd as there was a Christmas lunch thrown into the mix, but for the work meetings I did have I remembered how my suggestions may be interpreted by others. I made extra effort to demonstrate the genuine appreciation I felt when feeding back on different ideas. I also made a point of enjoying and celebrating the company of colleagues. I would easily say that the people I work with are what makes my work great, so in a completely honest and somewhat uninhibited way, I embraced that during our Christmas lunch.

As I write this on my phone on the train, slightly worse for wear from a little bit too much red wine, I feel a profound sense of gratitude for my colleagues and for the work our organisation does – which I feel our work contributed massively and deliberately to. I feel warmly towards my colleagues as people in the holistic sense, and grateful that I can do what I think I’m good at, with people I get on with and respect, to do something that makes the world better.

Another odd day. It’s my last day in the office before the Christmas break, and after work was my team’s planned Christmas dinner.

And what a dinner it was! After a team vote by email we had reservations for 17:30 at the Waldorf. As you might expect with such an early reservation, we were the only ones seated when we took our seats at half-five, beneath glowing white paper and fairy light trees and an intricate high ceiling of cream and gold. 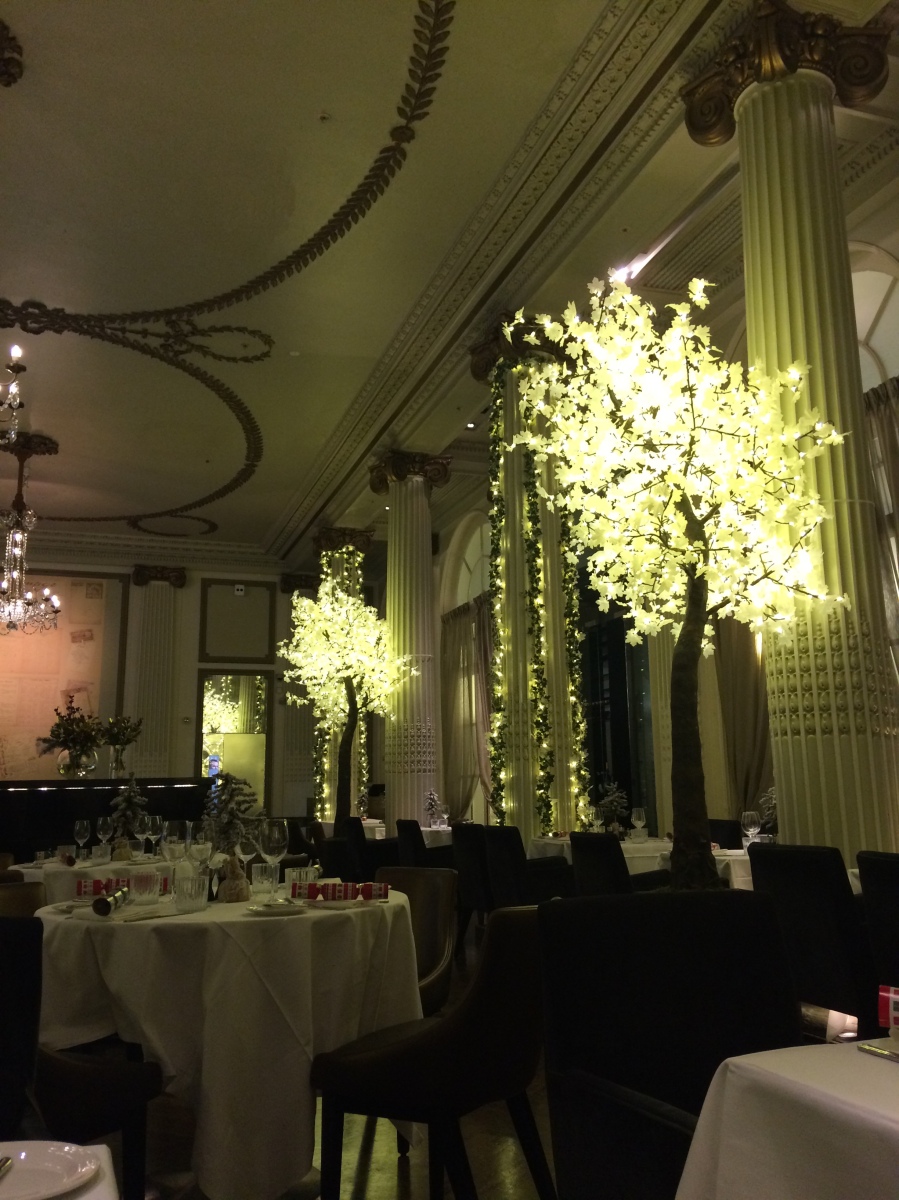 Unfortunately, as many working parents may be able to relate, I had to leave by 7pm to make it home in time to help my other half with wrangling small humans into bed. The service was overly eager upon arrival, followed by twenty minutes or more of being ignored completely, so that an hour-and-half after being seated our mains had not arrived. This meant I paid £40 for a small bowl of mediocre soup, some mediocre bread, and a couple glasses of less-than-mediocre wine, leaving my main to be split amongst my team.

Meanwhile, I had to extricate myself (somewhat awkwardly) to rush to catch a train, knowing all the while that despite my best efforts I will be late to my family, all of whom will likely be harried/upset/over-tired and need soothing, not least of whom my husband. So I feel like I’ve failed my colleagues, who don’t understand why I cannot miss my kids’ bedtimes, and my family, who will no doubt think I’ve been off gallivanting instead of watching the clock and finding ways to leave as soon as I could.

This was fairly indicative of the day and my mood last night. I was irritated by a few things across work and home life, and was still feeling annoyed as I went to bed.

My sour mood from the night before continued into my Friday, even though I had the day off and lots planned for the day. First, taking my boys to see Santa in the woods at a nearby country park, followed by dropping my youngest at the nursery and taking my eldest son to the gym to play while I worked out, followed by McDonald’s and The Grinch at the cinema with a friend and her son, who has been friends with my son for ages.

The thing that occurred to me today was: boundaries. What the irritants carrying over from the day before all had in common was I needed to have better boundaries.

The benefit of boundaries is that these are about me: what’s okay and what’s not okay for me.

The recent negative triggers all took on a totally different light when I looked at them this way as “right” and “wrong” weren’t part of it. It wasn’t about other people; it was about my boundaries.

I didn’t have to make a case for my view either. I am entitled to have some boundaries, just like anyone.

And that’s where I tend to obsess – making the case to be sure I am “right” about something.

This realisation isn’t entirely unrelated to “turning towards the light” either, as really, by focusing on my boundaries on certain issues, I am focusing on a truth, often a positive, value-driven one. Instead of ruminating on, “what were they thinking?” or “why can’t they understand where I’m coming from?” I find myself thinking about why something is important to me, and feel good about my decisions rather than casting aspersions at the decisions of others.

It’s been an empowering and relieving thought today. I wonder what tomorrow will bring.

This morning, I’m reflecting on the less-deified version of the line from Advice and Queries. “Take heed…to the promptings of love and truth in your hearts. Trust them as the leadings of good [my amend], whose light shows us our darkness and brings us to new life.”

And I realise that the ‘light’ from yesterday has shown me my darkness; namely, that so much of the behaviours and thoughts that hurt me and potentially others stem from this need to be correct in my viewpoints and dealings. There’s a lot of pressure in being ‘right’, and a lot of stress in only validating one’s feelings when one is categorically correct. It’s highly judgemental – of myself and of others.

But every human is allowed boundaries.

So I don’t have to be in the right about the disagreement I had with someone about what’s appropriate entertainment for a five-year-old; but I can say that what is okay for me and my five-year-old, with the aim to having this request respected by others.

It was an interesting week in that it was particularly trying in some ways. I guess it made a good time to test a different approach.

‘Turning towards the light’ did not work when it led me to trying to ignore uncomfortable feelings. I ruminated slightly less than before, but my brain kept wanting to go back to building my case for why it was okay for me to feel the way I was feeling.

Naming what I was feeling, without judgement (good or bad) was only so helpful. I think what I really wanted was to feel justified and be able to take action on those uncomfortable feelings.

The most helpful realisation of the week, put into practice, was to re-frame the uncomfortable feelings into boundaries. What did this irritation or annoyance or anger signal was a neglected boundary?

This helped me move beyond ruminating and building my case, to accepting my feelings and deciding appropriate next steps in the real world beyond my thoughts and daydreams.